We will be picked up early in the morning aboard 4x4 from your hotel/Airport or anywhere in Agadir, and direct transfer to the calm town of Tafraoute. Tafraoute is situated in the wonderful Vallée d'Ameln. This tiny village is surrounded by mountain slopes. At the end of February and the beginning of March, Tafraoute and the surrounding villages celebrate, for several days, the almond harvest with Berber music, dance and singing. Southwards from Tafraoute, we head on an excursion to the magnificent Oasis Afella-Ighir, the Aït Mansour Gorges as well as the the tiny village of Aït Mansour. All this fabulous region of the Anti Atlas is impressive! You will be marvelled by the astonishing panoramique and breathtaking views and the many oases scattered along the valleys which host the Berber villages.

After breakfast at the hotel, we leave the charming village of Tafraoute, but thankfully the beautiful scenery continues as well. The scenery is truly staggering, especially during the spring when almond trees come into blossom. We head to our next destination of Ighrem then to Tata. Tata is a small town flanking a large oasis, it’s situated on the Sahara plain, close to the Algerian border and the mountain range Anti Atlas at the foot of Jebel Bani.Tata is leisurely and friendly with a distinct desert influence of the people, the black turbans of the men and the colourful sari-like coverings of the women. After done with sightseeing of Tata direct transfer to Foum Zguid where we will spend a night in the Hotel.

Have nice breakfast at the hotel then we drive to cross the desert off-road between Foum Zguid and M'hamid to Erg Chigaga, Lake Iriki, Foum El laalag and Tamegroute Jam where we will have the chance to visit the pre-Islamic necropolis, the ancient library as well as the green Ceramic. In the late Afternoon we reach Zagora where we will spend a night in the Kasbah hotel.

After breakfast depart to Merzouga via different Kasbahs, villages, Draa Valley. The itinerary continues by N’kob and Tazzarine oasis (featured in the film ‘Babel’). By the afternoon we reach Merzouga where we will have a night in the Hotel.

After breakfast, depart to the Rissani town, the former capital of the Alawites Sultans. Rissani is known for its important market for caravans of sub-Saharan region Sijilmassa and the Moulay Ali Cherif gate, visit of the mausoleum of Moulay Ali Cherif, where the father of the founder of the Alaouite dynasty is buried as well as a visit to Sijilmasa, the surrounding old Kasbahs, palm grove and the Market. This is a wonderful destination for those who wish to learn some of the history of the country. Lunch at local restaurant in Rissani, you may be intersted in tasting Al Madfouna (Berber Pizza). After lunch we head back to Erg Chebbi in order to exchange our 4x4 by the desert Ship (camels). You can take a two-hour camel ride in the Sahara. The sunset from the top of the dunes is spectacular (250m) and afterwards there is dinner and the night in a nomad tent at the foot of the dunes with drumming party and Berber music.

Wake early and climb the dunes to sit or to take some nice pictures. Have a shower and After breakfast, direct transfer to Tinerhir famed with it’s beautiful palm grove, and The Aït el Haj Ali district (Jewish quarter). Along the way we visit the Khattar and different impressive Berber villages and old Kasbahs. Visit Todra Gorge, the highest oasis valley gorge in Morocco with 300m sheer cliffs and a mouth just 20m wide. Overnight.

After breakfast depart to Todra gorge then to Dades gorge. Along our way we will pass by Tamtattouchte, Ait Hani, Agdal, Msemrir and Gorge du Dades arriving at Msemrir. Overnight in Boumalne Dades.

We leave per track to get into the High Atlas, where we observe the change of life of the Berbers of the mountains and the difference between the desert nomads and the Atlas. We will see the caves where they live, and take tea with them, talk to them about their habits and play with them kids. We continue to track the path to enter the Valley of Roses, where its people made creams, soaps and the famous rose-water from all natural crops of roses. Then we go to Skoura palm grove where some of the most of beautiful Kasbahs of the southern Morocco are located (Amridil Kasbah, Ait Abbou kasbah).

After a nice breakfast, we start our excursion in Ouarzazate visiting the Kasbah Taourirt, formerly the property of the last Pasha of Marrakesh, Thami Glaoui, who left Morocco at the end of the French colonisation which he still supported (Possible visit to Atlas Cinema Studios). From here a visit to the most famous Kasbah in Morocco is scheduled, the 16th century Kasbah of Ait Benhaddou. This is the most known Kasbah in Morocco and best preserved. The walk through the winding streets a top the Kasbahs offers splendid views. Then we continued to the Tazenakht, Taliouine to visit Taroudant,... Journey's end in Agadir. 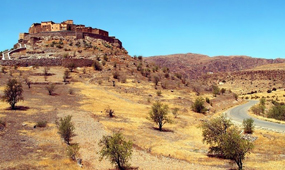 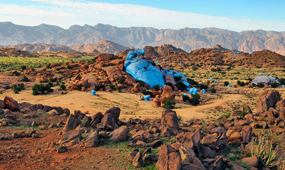 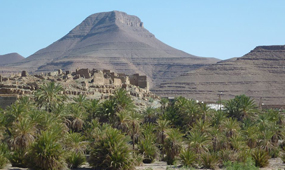 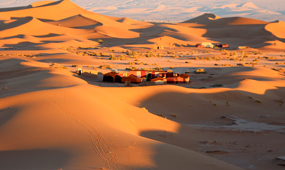 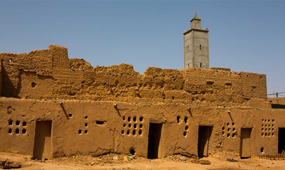 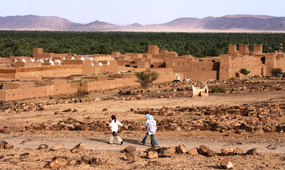 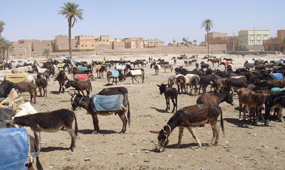 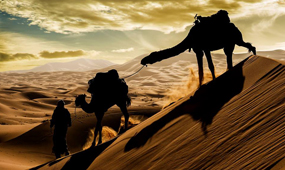 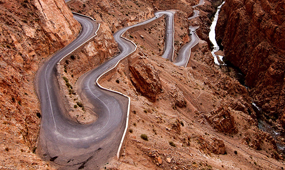 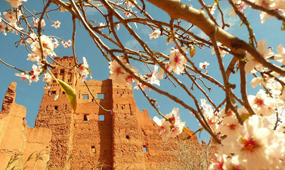 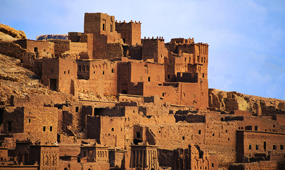